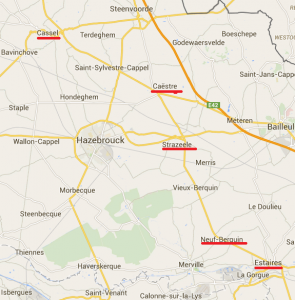 “The R.M.R. is now very much at home in the trenches.  Canadian initiative is well to the fore.  ‘Dug-outs’ constructed by ex-habitues of St. James and St. Catherine streets would fill a British Tommy (if he were not too good a sportsman) with envy.  It is literally true that, after a while, being shot at seems to be the most natural thing in the world.  Men grow careless about keeping under cover, so, unfortunately, several have been picked off by snipers when thoughtlessly exposing themselves above the parapets.  News reached us today that Corporal A.V. Brown has died at the base hospital, following the amputation of his arm.  He had been promoted to corporal only a few days before being struck by an exploding shell.  He was most popular with the men of No. 3 Company (formerly 3rd V.R.) – his keenness, good humour and coolness made him an excellent N.C.O.  Oddly enough, Lance-Corp. Evan Cameron (of the McGill Cricket Club), who was standing beside him when the shell burst, although knocked down and partially deafened, escaped without other injury.  War is not without its humors.

The other afternoon the Germans turned a trench mortar on a party bringing ammunition into our trenches.  The detail arrived safely, handed over the boxes, and prepared to depart. ‘We’ll go back this way,’ said the sergeant. ‘I think the way we came would be the best,’ volunteered an argumentative private.  ‘Silence,’ roared the sergeant, leading his flock out into the open.  Just then a shell burst to their left, a fragment bowling over the argumentative one, giving him a nasty gash in the head.  He staggered to his feet, bleeding profusely, and in a towering rage put his face up close to the N.C.O.’s, ‘I told you the other way was best,’ said he!

‘The Damson and apple jam, so plentifully supplied to the Canadian warriors, is made by one Tickler.  Henceforth he will be doubly famous.  The tin receptacles of this delicious compound, when empty, are filled with high explosives, fitted with fuses and used as bombs, or hand grenades.  Hence the men specially detailed for bomb-throwing are now known as ‘Tickler’s Artillery.’   A certain number of men are selected from each company for this gentle pursuit, which is rather a dangerous one.  When the trenches are close enough, the grenades are slung across.  If an attack is made, the bomb throwers go ahead and slay as many ‘Bosches’ as possible before the men with fixed bayonets arrive.  Sergeant Hardwicke (of the Vics, who in private life is with the Marconi Company in Montreal) is an enthusiastic follower of this form of warfare.

General Alderson, in command of the Canadian Division, is a familiar figure nowadays, frequently exchanging greetings with the rank and file as he rides past. His geniality makes him very popular with Canadians, who might not appreciate the traditional stiffness of manner of the British officer of the old school.

‘A painful topic, but one which exacts a great deal of attention in and out of the trenches, is the prevalence of ‘unwelcome guests.’  Some euphemistically refer to them as ‘a rash.’  None escapes them, officers and men alike are their unwilling hosts.  Whence they come no man knows, but when they come, they come to stay.  The parasites are officially recognized, and the first day after coming out of the trenches is devoted to a bathing parade.  Tubs full of hot water are provided and the regiment washes itself by platoons.  Clean underwear and socks are given out, the cast off clothing is burnt, and the platoon departs clean and unspotted.

‘As has been said, the Germans are a wily people and masters of espionage.  The Canadian Division has, curiously enough, been utilized by them for their own nefarious ends.  Before the contingent had even landed in France, Teutons were circulating through the British lines, wearing Canadian uniforms and posing as officers of the advance party.  Several were captured and shot.  Only last week a motor drove up to headquarters, containing two officers, immaculately uniformed.  They asked for certain information and the senior gave his name, quite readily, as Major So and So of the Canadian Artillery.  Headquarters quietly telephoned, discovering that the real major was still in his billet.  That night there were two German spies the less.

‘Spring is well on the way.  A few apathetic peasants plough all day long within some hundred yards of the front.  They seem to care little for the shells that often fall quite near them.  The country is marvellously fertile, due, no doubt, to the fine system of irrigation.  One sees on all the fields intersected by road signs reading: ‘Please do not ride on the growing crops.’  It is strange, nature quietly fulfilling her great function – replenishing the earth, while on every side man is hard at work devastating unceasingly.  The farm houses, the barns, the little wayside inns, are all shattered ruins now, but the young wheat peeps above the ground as tenderly green as in those springtides before the old order of things passed away.”  [3]