Westmount, Quebec – 25 May 2016: The RMR cadet corps 2806 Pointe-Claire will be celebrating their 50th anniversary this coming Saturday 28 May 2016, marking the occasion with a special Annual Parade to be held at the RMR’s armoury at 4625 Ste-Catherine Street West starting at 18h00.

The event is open to the public and former members of the Cadet Corps are especially welcome to attend, as there will be a reception for them after the parade held in the Junior Ranks Club. 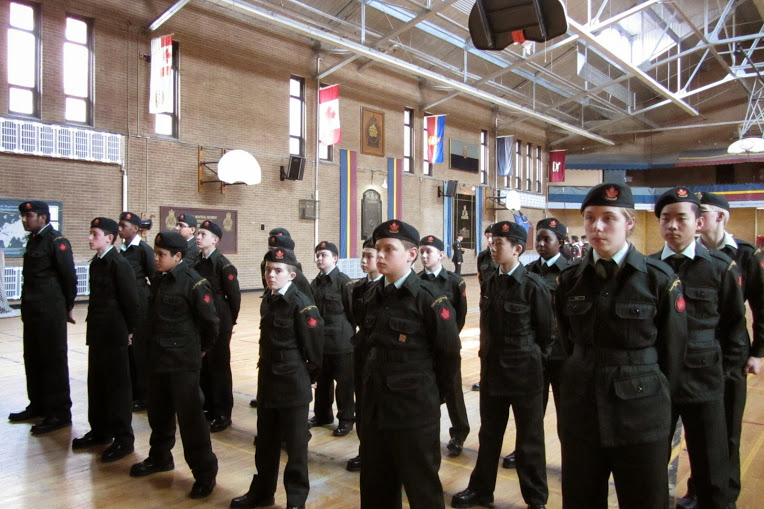 Brief summary of the origins of 2806 Pointe-Claire (RMR):

Authorized and sponsored by the City of Pointe Claire, Quebec, the City Council adopted the resolution on 12 September 1966 and the Cadet Corps was formed on 1 October 1966, followed by its affiliation with The Royal Montreal Regiment that very day. His Worship Mayor (Lieutenant (R)) A.E. Sequin and Lieut.-Col. H.A. Etheridge, CD, Commanding Officer of the Regiment, participating in the event. The first Officer Commanding the Cadet Corps was Major A.H. Howell, CD, a former serving member of the Regiment, (1966-70).

On 22 October 1972, His Worship Mayor A.E. Sequin, N.MA, kindly presented the Cadet Corps with its Flag at a colourful ceremony held near the City Hall, and in the period of 1972-73 the Corps raised a Band which participated for the first time in May 1973. [1]

The Royal Canadian Army Cadet movement is designed for youths 12 to 18 years old looking for adventure in the areas of orienteering, biathlon, precision drill, camping and survival, sports, music and much more while developing friendship and team spirit. There are no registration fees or costs for the authorized Cadet uniforms or for the basic Cadet program. Qualified Cadets may attend summer training camps for free or participate in international exchanges.

RCACC Pointe-Claire is located in Pointe-Claire, Quebec and caters to youth from across the West Island of Montreal. We parade every Saturday from 0900 hours until 1200 hours with optional training opportunities offered from 1200 hours to 1530 hours. The unit trains in English and in French. For more information about army cadets or our unit in general, please check out the information found in their registration section: http://2806cadets.ca/home_e.html