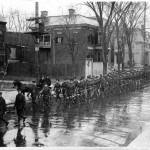 Recruits of the 14th  Battalion  of  the  Canadian Expeditionary Force stood on the shoulder to shoulder for the first time in torrential rain on the evening of August 14, 1914, in a downpour on the Champs de Mars which ever since has become to be known as “RMR weather.”  It is easy to imagine them, as  The  Gazette  did, “a proud sight … one that brought a thrill, “ and one that “ brought the war fever very close to home.”

Hostilities between the European powers  had been in the wind as early as 1911 when the German Kaiser sent one of his battle ships rattling around the French colonial port of Agadir, in a direct challenge to a Triple Entente signed by France, Britain and Russia who had teamed up against Germany and Austria.   In June 1914, the heir  apparent  to the throne of the Austro-Hungarian Empire was murdered in Sarajevo. Austria sought to find the assassins on sovereign Serbian territory giving the Germans the excuse they  needed  to go to war. Germany stepped in on Serbia’s side, and on Aug. 2, 1914, declared war on Russia.  Two  days  later,   Britain declared war on Germany. Because the British foreign office was responsible for  Canadian  foreign policy, Canada, was automatically at war.  Canada’s Minister of   the Militia,  Col.  Sam Hughes, promised to raise an army of 20,000 volunteers.  A man of explosive temperament, Hughes began the  mobilization  by frantically building a new military training base at Valcartier, Quebec. The  hastily  assembled 14th Battalion  was  pulled together from three existing Montreal militia regiments:  The 1st Regiment Canadian Grenadier Guards, the 3rd Regiment  Victoria  Rifles and the 65th Regiment  Carabiniers de Montreal, and styled itself the RMR.

Canada in 1914 was dismally unprepared for a European war, but then again, it didn’t need to be.  Going to war had real appeal.  Everyone assumed it was going to be a short and easy fight.

“The storm had not the slightest effect on the troops,” The Gazette reported.  “Without hurry or confusion they continued  to  fall in until the last regiment was in position.”   A number of the men were still without uniforms, and ankle   deep in mud and water, they maneuvered with uncertainty.”

More than a third of them, like Charles D.B.  Whitby a 27-year old Gazette reporter were British immigrants  to Canada who were eager to defend their motherland.  Whitby was originally from Bath and hoped to chronicle the battalion’s war exploits for the paper. The Montreal Star sent the head of its promotional department, Hugh Graham Brewer.  Thomas Moore, who had served with the Welsh  fusiliers in China  during the Boxer Rebellion and had earned the distinguished conduct medal was from Merseyside.   Frank  “Scrimmy”  Scrimger was  a slight, 130 pound  doctor with the  Montreal  Heavy  Brigade of the Canadian Garrison Artillery.  He had picked up some German while studying  medicine  in Dresden and thought it his  patriotic duty to enlist. Fred Bagnall, a  student  from Prince Edward Island, had just arrived in Montreal to  work  at the YMCA. He signed  up  even  before he wrote home to tell his disapproving Quaker parents what he had done. There were recent arrivals to Canada too, like 25 year old  Gerrit Brouwer, a young Dutch labourer who  feared for the safety of his family back in Holland, and there were mercenaries in the crowd as well.

As the men left the parade ground, deep thunder rolled overhead and flashes of   menacing lighting foreshadowed what lay ahead..   The sons of millionaires, like 21-year old Andrew Paton Holt, whose father was President of the  Royal  Bank marched alongside the sons of  blue-collar  workers  like   Leo Bélanger, a  23 year old French-speaking  tailor from east-end Montreal, who  enlisted out of a sense adventure and  Fortunat Auger, a young architectural draftsman, who thought he might further his education in Europe.  One of the  battalion’s four companies of  about 250 men would be designated French-Canadian,  although  English was to  be the regiment’s  official language, thus, in theory at least, starting a tradition of official bilingualism years before it was officially ingrained.

Hughes decided the regiments would be numbered, not named.  Cheekily, the men of the 14th   began referring to themselves  as  “The Westmount  Regiment”. By the time they arrived for basic training at   Valcartier it  had become  “The Royal Montreal Regiment.” Under the command of  their opera- loving Lieutenant-Colonel,  Frank Meighen,  46 officers and 1,097 men  of the 14th set sail for England on  Oct. 30, 1914  aboard the new Cunard liners  Alaunia and  Andania.   They were thrilled to have received their marching orders, less thrilled when they arrived for military training at Salisbury Plain, a desolate chalk plateau near Stonehenge, 150 km south west of  London.  It would be one of the wettest and  coldest winters in  British history.  The  Regiment spent a miserable autumn and  winter in  the cold and the mud.  “The camp looks exactly like a gold rush, and feels like Yukon most of the time,”   one soldier wrote to his parents.  Conditions were so  brutal, three soldiers with the 14th died  meningitis.

The Regiment was duly recognized by the British as a fighting force on Nov. 2. Its first  fight,  it discovered, was, however, to preserve  its  Canadian identity.  Lt.-Col  Meighen asked Sgt. Herbert Salmon, a draughtsman who had spent 14 years in the Canadian Permanent Force, to  design The Regiment’s cap badge.  Meighen disingenuously   assured Salmon that the 14th was indeed designated  “Royal” and therefore  entitled to a badge with the garter, motto and the crown. Salmon produced a rudimentary sketch and wanted something more detailed. But Meighen pronounced the design “satisfactory.”  The high command had not yet approved of the so-called “Royal” designation or the cap badge. It wanted to strip the expeditionary force of any Canadian insignia, make them all British soldiers.

It was also hoped by the three highland regiments in the 3rd Brigade that the 14th would convert to a highland uniform, where the men would be expected to wear kilts, thus forming a “Highland Brigade”.  They balked in no uncertain terms and the Regiment stubbornly resisted efforts to turn them into a highland unit, which allowed them to joke later that they were the only unit in the 3rd Brigade to fight with their pants on. The soldiers were further irritated to discover that they couldn’t get a beer at the the training camp.  Many went to local pubs where they created havoc in the surrounding villages.  Even The Regiment’s good-humoured  padre Fred Scott cheerfully conceded that the conduct of the Regiment was  “disgraceful…but with reason.”

The high command, which had little time to waste time arguing with “crude colonials,” relented and allowed the regiment to keep the cap badges, but not without complaining that the soldiers  were  a “a mob of  hot-blooded amateurs ready to give their all.”

On  November  4, 1914  King George V arrived to inspect the new born Regiment with the rest of the Canadian Division, and found the soldiers soaked to the skin and shivering in their boots.  The constant  coughing  prompted one of their commanding officers to order them to,  “Shut up or his Majesty will think you are a company of consumptives.”   By Christmas conditions on  Salisbury Plain were so  miserable that “training was impossible and recreation difficult to arrange.”  It wasn’t until February that the 3rdth Brigade under the command of  Canadian Brigadier General  Richard Turner and with Ross rifles –  guns that easily jammed in rapid fire conditions  and were not very dependable –  was  deployed  to  Fletre,  near the Belgian Frontier.   Turner, a Quebec City native, had been awarded the Victoria Cross during the  Boer War.   No one questioned his bravery, but as a commander, he himself  admitted he had  “a lot to learn.”   Under Turner, in charge of 14th Batallion,  was  Lt-Col.  Frank  .Stephen  Meighen.  At an inspection ceremony in Fletre, the British Field Marshall John Denton Pinkstone French, whose best years on the battlefield were behind him, was impressed enough to remark that if the men were as tough as they looked, the Germans were in trouble.

Their initial objective was to relieve embattled colonial French troops along the Western Front, a meandering network of trenches that stretched for 700 km from Ostend, Belgium to Basel, Switzerland. The strategy was to be “stationary, yet aggressive” and keep the 51st German Reserve  Division from  advancing from occupied Belgium into France.

Researched and written by Alan Hustak