The Battalion War Diarist wrote for this day: “Fairly quiet.  One man killed and two wounded by snipers.  Enemy evidently searching for our batteries as they fired six heavy shells into a field near corner of Rue Du Bois and Sailly-Fromelles Road, but there was no battery anywhere near that spot.” [1]

The Battalion history notes: – “The three day tour that followed was marked by appreciable activity, the enemy sniping persistently and shelling at intervals. One man was killed by a sniper on March 18th …”

THIS DAY IN RMR HISTORY: “Although the Canadians were in a quiet sector, the threat of danger was constant.  Units suffered a dozen or more casualties a week.  Night patrols, sent to explore enemy defences or find gaps in the wire, tested men’s nerves for at any moment they were apt to be exposed by flares in no man’s land and subjected to deadly machine-gun fire.  German snipers, with their telescopic sights on their rifles, were especially adept at picking off the unwary.  W. Stevens (14th Battalion) described what happened to one of his careless mates:  “Pat Rattigan, he was on top of the trench pounding down some sandbags and somebody said, ‘You crazy something, get down out of there,’ and the next thing some of us heard was a ‘crack, phut,’ and Pat got it in the tummy and that was our first man.”  *   [3] 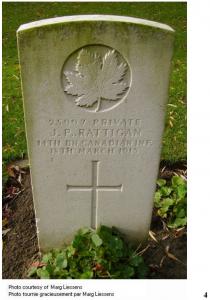 Rattigan was born March 17th, 1884 at Liverpool, England, and had come to Canada where he worked as a “wire drawer.”  When war was declared he joined up with the Victoria Rifles of Canada and was one of the 349 men , and twelve officers, transferred from the ‘Vics’ to the 14th Battalion (RMR) on the creation of the latter unit. [5]  He signed his attestation papers at Valcartier September 21, 1914, and was assigned to D Coy. of the 14th(RMR).   Killed in the trenches south-east of Fleurbaix on March 18, 1914, he was initially buried near where he fell.  His remains were later exhumed from a “water-girt orchard of the farm on the western side of the Rue Petillon about 350 yards north of the intersection of the Rue Petillon and the Rue Delvas, a short distance behind the [then] present support line, 2 ½ miles east of Laventie, and was re-buried along with four others of the 14th Battalion in Le Trou Aid Post Cemetery.”   [6]

*  Note:  In actual fact Rattigan was not the first member of the 14th Battalion to be killed in action, as five others had been killed in action between March 4th and March 10th, 1915