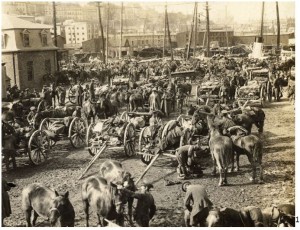 Artillery, prior to loading aboard ship at Quebec, September 1914.

THIS DAY IN RMR HISTORY, 26 September 1914 – “From the outset it was the intention of the Militia Department and the War Office that the Canadian Contingent should lose no time in moving to England, where preparations were being made for training on Salisbury Plain.  Delay in completing the issue of clothing and equipment held the Force at Valcartier until the end of the third week in September, and embarkation for mounted units began at Quebec on the 23rd.  At a conference on the 21st in the Minister of Militia’s house at Valcartier Camp, attended by the Prime Minister and other members of the cabinet, it had been decided to send all effective men overseas – a total of 31,200.  The sudden increase by more than 6,000 invalidated a plan which the Director of Supplies and Transport had produced on 17 September allocating troops and horses to the 25 vessels already chartered, and even with the necessary revisions it was rejected by the Minister.”  [2]

It was no wonder that chaos reigned supreme.  Somehow the job got done in spite of many obstacles, which included a tendency on the part of some units to disregard regulations.  Some units failed to wait as instructed at certain rendezvous areas.  In the absence of loading plans units were brought successively into Quebec as vessels arrived with reputedly the approximate space for men and equipment.  Mounted units proceeded from Valcartier to Quebec by route march, while all others were moved by rail direct to shipside.  Loading was often very much by trial and error. Only after one battalion was loaded with their wagons and baggage onto one of the smaller transports, was it found that there was not enough space and all had to be transferred to a larger vessel.  In some cases transports arrived from Montreal with their holds already filled with non-military freight, eg. grain or flour for the British.  After half the transports had pulled out into the river, tugs had to ferry ammunition to them in order to comply with a belated order that each vessel should carry an allotted number of rounds.  With these complications it is hardly surprising that few units embarked with their full complement of horses, vehicles and baggage in the same ship.  Mounted units were dismayed to find in many cases they were separated from their mounts, and because of limited passenger accommodation on  the horse-boats, attendants had to look after as many as sixteen animals instead to the four prescribed by military regulations. Much space was unnecessarily wasted when guns and limbers were shipped without first removing their wheels.  As a result some vessels were forced to take on water ballast to complete their loads.  In many cases it was discovered the hatchways on vessels were too small to take on crated motor trucks.  An additional vessel, the Manhattan, had to be chartered from New York.  It took on board 90 motor vehicles, 863 horses and a considerable amount of cargo left out of the other vessels.  This ship departed Quebec on October 5th and sailed independently.  [3]