Alpha and Bravo Company of the RMR square off in a winner takes all Company tug o’ war competition.

Westmount, Quebec – 17 December 2016: Following decades of tradition, the serving battalion of the RMR took a break from the serious business of soldiering and enjoyed each others company for the annual Christmas festivities, which includes a turkey shoot, a tug-of-war, a floor hockey tournament, and the traditional Christmas dinner where the leaders serve the troops and the “CO of the Day” is appointed to rule over the dinner.

For the tug o’ war, the recruit Company (Bravo) made a valiant effort but were no match for the more experienced and stronger group from of the the senior Company (Alpha) of trained rifleman. 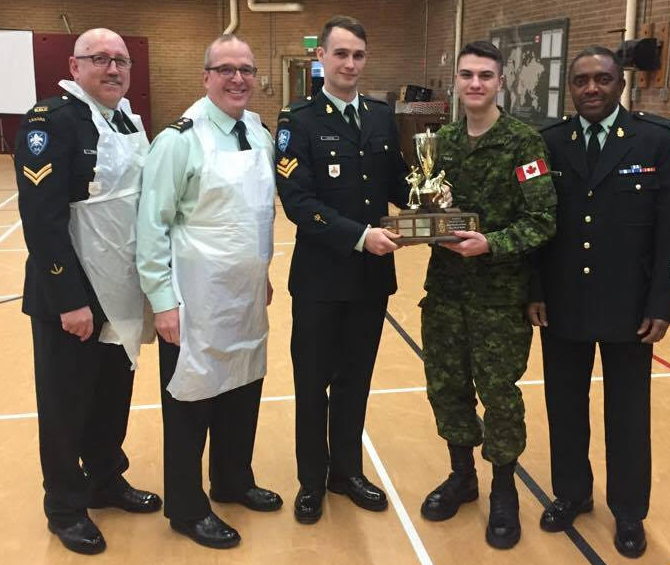 The PMC of the Junior Ranks Club (JRC), MCpl Carson, accepts the Inter-Mess trophy from the CO and RSM of the day for winning the annual hockey game. The actual CO and RSM stand-by in their aprons, ready to leap into action as required.

The Junior Ranks Club (JRC) were victorious in a tightly contested game against the combined team from the Officers’ Mess and WO’s & Sgts’ Mess. The game finished 0-0 with the Junior Ranks winning a heart breaker in an unprecedented 15 rounds of the shootout. Rumour has it the losing side is considering contesting the victory however the JRC claim their speed, stamina and unusually high levels of energy are a testament to their excellent level of fitness and in no way related to the use performance enhancing drugs! 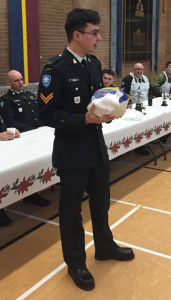 Corporal Baron gives a long winded speech after accepting the award as the winner of the Regimental Turkey Shoot. Cpl Baron shot the high score of 15 and was deserving of the frozen turkey for the best shot of the day!

Possibly one of the highlights of the day was the awarding of the prize for the traditional turkey shoot, which is donated courtesy of the WO’s & Sgts’ Mess and comprises of yes, and actual turkey.

More than one sigh of relief was thought to be heard as recruits were ushered into the Firearms Training Simulator (FATS) room for the ‘turkey shoot’ when they finally realized that they weren’t being asked to participate in a mass execution of actual turkeys, but more like a standard army shooting test.