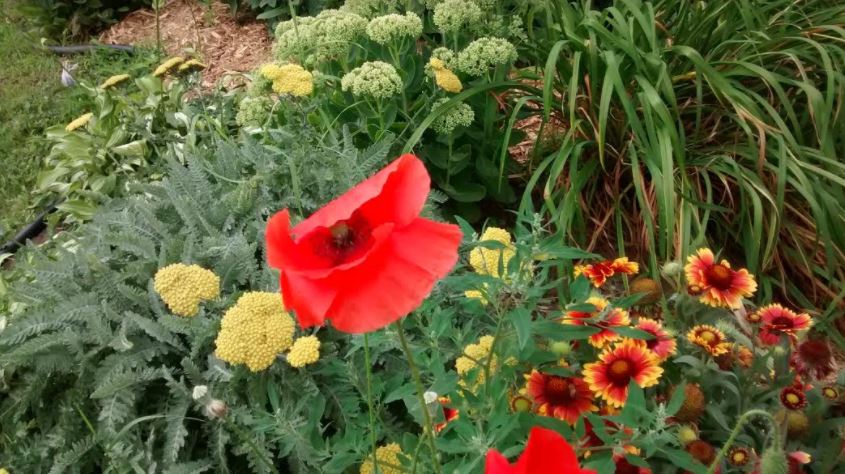 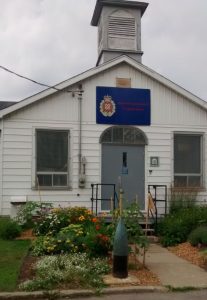 Montreal, Quebec – 20 July 2017: Fabiola Corona, Museologist with the CF Logistics Museum in CAFB Longe-Pointe, shared some photos with us of poppies growing in their garden. She had received the seeds when she visited the RMR’s Regiments on the Ridge: Vimy 100 Years On exhibition (“Vimy 2017”), held at Westmount’s Victoria Hall over three days in the first week of April 2017. Consisting of a display of WW1 artefacts, diaries, weapons, maps and more from the RMR Museum’s collection, supported by documentary film viewings four times daily, as well as a reenactor dressed in WW1 replica uniform.

Poppies are not common in Canada, yet grow abundantly in the areas that the Canadians were fighting during the First World War: Northern France and Belgium.

In his “This Day in RMR History” feature for the RMR’s centennial, Captain (ret’d) Hamilton Slessor explained the significance of the poppy in a post written on 03 May 2015.  “In Flanders Fields” is a war poem in the form of a rondeau, written during the First World War by Canadian physician Lieutenant-Colonel John McCrae. He was inspired to write it on May 3, 1915, after presiding over the funeral of friend and fellow soldier Lieut. Alexis Helmer,* who died in the Second Battle of Ypres. According to legend, fellow soldiers retrieved the poem after McCrae, initially dissatisfied with his work, discarded it. “In Flanders Fields” was first published on December 8 of that year in the London-based magazine Punch.

It is one of the most popular and most quoted poem from the war. As a result of its immediate popularity, parts of the poem were used in propaganda efforts and appeals to recruit soldiers and raise money selling war bonds. Its references to the red poppies that grew over the graves of fallen soldiers resulted in the remembrance poppy becoming one of the world’s most recognized memorial symbols for soldiers who have died in conflict. The poem and poppy are prominent Remembrance Day symbols throughout the Commonwealth of Nations, particularly in Canada, where “In Flanders Fields” is one of the nation’s best-known literary works. The poem also has wide exposure in the United States, where it is associated with Veterans Day. 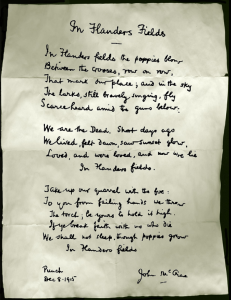 John McCrae was a poet and physician from Guelph, Ontario. He developed an interest in poetry at a young age and wrote throughout his life. His earliest works were published in the mid-1890s in Canadian magazines and newspapers. McCrae’s poetry often focused on death and the peace that followed.

McCrae’s original poemAt the age of 41, McCrae enrolled with the Canadian Expeditionary Force following the outbreak of the First World War. He had the option of joining the medical corps because of his training and age, but he volunteered instead to join a fighting unit as a gunner and medical officer. It was his second tour of duty in the Canadian military. He had previously fought with a volunteer force in the Second Boer War. He considered himself a soldier first; his father was a military leader in Guelph and McCrae grew up believing in the duty of fighting for his country and empire.

McCrae fought in the second battle of Ypres in the Flanders region of Belgium where the German army launched one of the first chemical attacks in the history of war. They attacked the Canadian position with chlorine gas on April 22, 1915, but were unable to break through the Canadian line, which held for over two weeks. In a letter written to his mother, McCrae described the battle as a “nightmare”: “For seventeen days and seventeen nights none of us have had our clothes off, nor our boots even, except occasionally. In all that time while I was awake, gunfire and rifle fire never ceased for sixty seconds…. And behind it all was the constant background of the sights of the dead, the wounded, the maimed, and a terrible anxiety lest the line should give way.” Alexis Helmer, a close friend, was killed during the battle on May 2. McCrae performed the burial service himself, at which time he noted how poppies quickly grew around the graves of those who died at Ypres. The next day, he composed the poem while sitting in the back of an ambulance. ”[1]

The Royal Canadian Legion sells packets of poppy seeds which can be purchased online here.