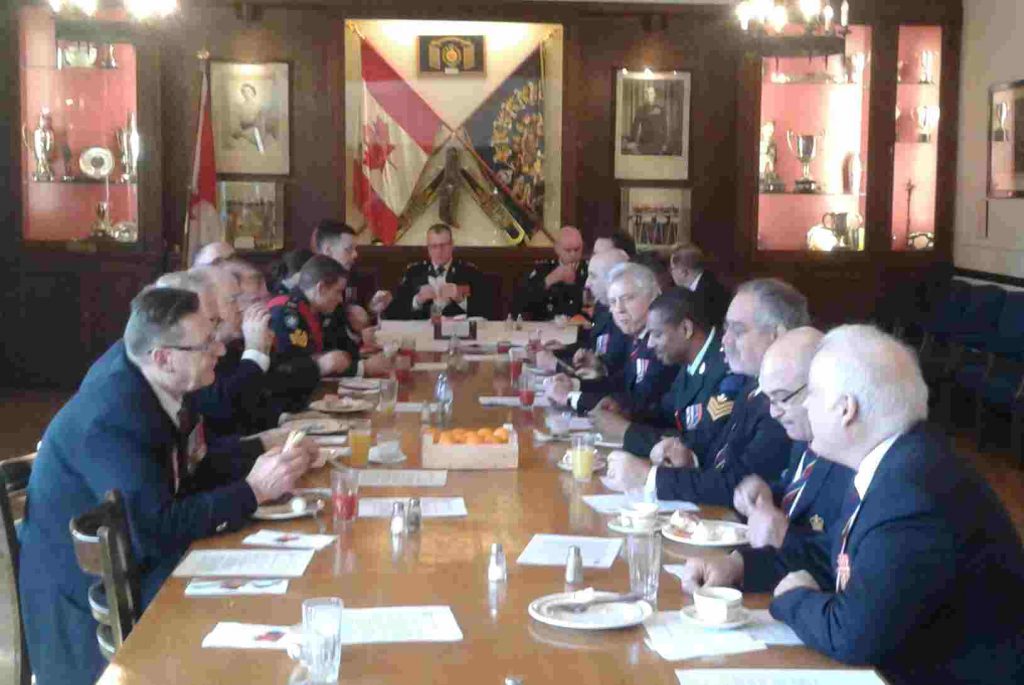 Westmount, Quebec – 02 January 2018: The New Year was kicked off in fine fashion yesterday at the RMR, with more than 30 members of the extended RMR family gathering for the “CO’s breakfast”, as well as some traditional moose milk and bloody caesars. Throughout the day many visitors came through to pay their complements and enjoy a drink in the company of friends and comrades.

Lieutenant-Colonel John Shone began the breakfast with a short discourse on the origins and traditions of Levee Day, which he noted is a uniquely Canadian custom. An abstract of the origins & traditions is below:

The annual New Year’s Day Levée, hosted by the Governor General, the Lieutenant Governor, military establishments, municipalities and other institutions, has an unusual and interesting origin.

The word Levée is derived from the French verb lever – to rise (specifically from one’s bed) – and has its origins in the Levée du Soleil or Rising of the Sun instituted by King Louis XIV (1643 – 1715) whose custom it was to receive his male subjects in the Royal bedchamber just after arising, a practice which subsequently spread throughout Europe.

The Levée crossed the English Channel in the 18th Century, and in Great Britain and Ireland became a formal Court assembly (reception) given by the Sovereign or his/her representative in the forenoon or early afternoon, at which only men were received.

In the New World colonies, the Levée was held by the Governor acting on behalf of the Monarch. Because settlers were widely scattered, and separated from the seat of Government, the annual Levée was a very important event, and attendance was compulsory for village leaders and public dignitaries.

It was in Canada that the Levée became associated with New Year’s Day. The holding of a Levée by the Governor General and Lieutenant Governors on New Year’s Day is not a continuation of the precedent set by the Sovereign they represent, but rather perpetuates an ancient custom of this country, dating from the days of the fur trade. The people of the trade traditionally paid their respects to their representative of government – the Master of the Fort – on New Year’s Day.

The first recorded Levée in Canada was held on January 1st, 1646 in the Château St. Louis by Charles Huault de Montmagny, Governor of New France from 1636 to 1648. In addition to shaking hands and wishing a Happy New Year to citizens presenting themselves at the Château, the Governor informed guests of significant events in the Mother Country, as well as the state of affairs within the colony (this tradition is carried on today within The Commonwealth in the form of The Queen’s New Year’s Message). In turn, the settlers were expected to pledge anew their allegiance to the Crown.

The Levée tradition was continued by British Colonial Governors in Canada, and subsequently by Governors General and Lieutenant Governors, and continues to the present day.

Today, the word Levée describes the receptions (usually – but not necessarily – on New Year’s Day) held by the Governor General, the Lieutenant Governors of the Provinces, the Military, and others, to mark the advent of another year and to provide an opportunity for the public to pay their respects.

The Levée has a long tradition in the Canadian Armed Forces as one of the activities associated with New Year’s Day. In years past, military commanders garrisoned throughout the vast expanse of Canada held local Levées since, as commissioned officers, they were expected to act on behalf of the Crown on such occasions.

As has the Levée itself, refreshments served at Levées have undergone changes (both in importance and variety) over the years.

In colonial times, when the formalities of the Levée had been completed, guests were treated to wine and cheeses from the homeland. Wines did not travel well during the long ocean voyage to Canada. To make the cloudy and somewhat sour wine more palatable it was heated with alcohol and spices. The concoction came to be known as le sang du caribou (caribou blood).

Under British colonial rule the wine in le sang du caribou was replaced with whisky (which travelled better). This was then mixed with goat’s milk and flavoured with nutmeg and cinnamon to produce an Anglicized version called Moose Milk. Today’s versions of Moose Milk, in addition to whisky (or rum) and spices may use a combination of eggnog and ice cream, as well as other alcoholic supplements. The exact recipes used by specific groups may be jealously guarded secrets.