Note:   The significance of this remark in the diary is the fact that messes and canteens in Salisbury Camp were operated by civilian contractors, in this case Harrods of Harrods Department Store. They operated under contract with the British military authorities, and were not at all to the liking of the Canadians, who preferred to have their messes and canteens operated by their own units, for their own benefit. The Canadians desired to have canteens in charge of canteen sergeants who would see proper regulations enforced instead of such institutions being under contract to outsiders who would only be interested in maximizing their trade.

NO REST ON SALISBURY PLAIN 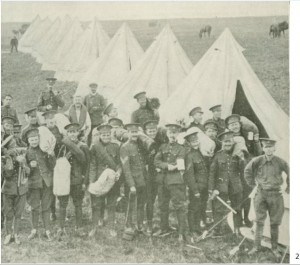 “London, Oct 18. Sunday has been anything but a day of rest at Salisbury Plain, save that the last of the Canadian contingent reached camp early on Sunday.  The camp now begins to wear an aspect of great liveliness.  The weather is rather chilly.  So far there has been no rain, thanks to its situation, though even a week’s downpour would not render the camp permanently uncomfortable.

The general health among the contingent is excellent. A few minor casualties are reported, chiefly among the men handling horses.  The latter are all tethered in the open and badly need grooming.

The Montreal Highlanders have the distinction of being the first foot corps to reach the camp. After them came the Alberta cavalry, whose advance guard of a “husky” (or Eskimo) dog as a mascot caused respectful astonishment among the yokels of Wiltshire in the march from Lavington.

Then came the divisional train and ammunition train. Immediately afterwards the trains were emptied of the Seaforth Highlanders and Queens Own of Toronto.

Close by the Canadians are a number of New Zealanders who are joining their own force in England and are awaiting the arrival of the main body.

Lord Roberts will review the Canadians on Monday.” [3]