The trophy for the Best Rifle Shot in The Royal Montreal Regiment (RMR) is awarded annually at the Church Parade to the soldier receiving the highest score on his/her annual Personal Weapons Test (PWT).  Care should be taken not to discriminate: soldiers assigned light machine guns (LMG) as personal weapons may fire the PWT using the LMG.  In such instances percentage, not total score, must be used as evaluation criteria for this award, regardless of the weapon fired. 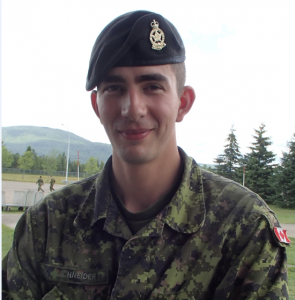 In 2015 the trophy was awarded to Corporal Erik Schneider, who serves as a Rifleman in “A” company. He joined the RMR in 2012 after having served three-years with the 34th Signals Regiment  before finally seeing the light and moving over to the Infantry.

He says that it is a three-way tie for his favourite memory of serving with the Regiment,  reflecting that “It’s a tie between Nijmegen, CAFSAC and my time spent in the RMR recce det. It’s been a great few years.” He admits that drill is the only thing that he dislikes about the military, but the thing he likes the most are reconnaissance patrols – and “blowing things up on occasion” (hard to disagree). He thinks that the coolest thing he has ever done with the Regiment was “Rappelling from a helicopter onto a tower as part of training for the CPC”.

Born and raised in Toronto, Corporal Schneider now lives in Montreal and is a recent graduate in his civilian life (International Business, with a minor in Economics).  His comments on being awarded the Shooting Trophy for being recognized as the best rifle shot in the Regiment were “I’m pretty happy about it. I’d like to thank the excellent marksmanship coaches at the RMR from last year’s CAFSAC and march and shoot teams.”

His advice to other soldiers who might want to win the same trophy in the future is that “Anyone can shoot well with proper coaching, practice, and a good attitude.”

Congratulations to Corporal Schneider, he deserves his trophy – way to set the standard!