Westmount, QC – 18 September 2014:  The colour sashes of The Royal Montreal Regiment were replaced a few years back by the generous donation by then Honorary Colonel Henry F. Hall, CD, a former Commanding Officer of the Regiment (1989-92 and 1996-99), and the Regiment recently decided to put the retired ones on display. 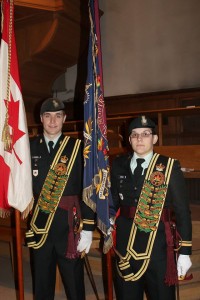 Colour Sashes are both decorative & functional, as they’re worn by the officers in the Colour Party on parade to support the weight of the Colours themselves. Emblazoned with the RMR’s battle honours (except for AFGHANISTAN, only recently awarded in May 2014), there is one for the Queen’s Colour, shown with Lieutenant Parker (Left) and another for the Regimental Colour, shown with Lieutenant Gareau (Right).

Next time you’re in the armoury, please stop by to view them.