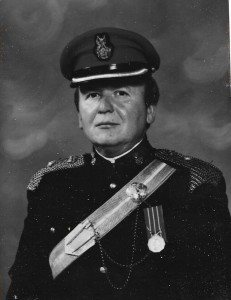 21 January 2017, Westmount, QC – The RMR Foundation is sad to announce the death of a friend of the Regiment, the former Commanding Officer of the Royal Canadian Hussars: Lieutenant-Colonel (retired) Roman Jarymowycz, OMM, CD.

Roman had a strong connection with the RMR, having served as an instructor in Kingston and influencing (and befriending) successive generations of senior RMR officers. In 1989 he co-authored The Royal Montreal Regiment: 1945 – 1989 with Allan Patrick and published by The Royal Montreal Regt., Westmount, 1991. One of the most valuable aspects of the book was the ‘Customs & Traditions’ annex of the book (affectionately known as “Volume 3”). This annex has proved invaluable in the subsequent years as a guide for RMR leaders.

MILITARY CAREER (credit Wikipedia): Roman Jarymowycz began his military career as a student at Loyola College in 1964 in the Canadian Officers’ Training Corps. Eventually he was promoted to Lieutenant-Colonel and Commanding Officer of the Royal Canadian Hussars armoured reconnaissance regiment during the late 1970s and early 1980s. A dedicated Cold Warrior, he served in Europe several times on NATO exercises.

After the Hussars he served as a Senior Staff Officer (Armoured) for Land Force Quebec Area Headquarters. Perhaps his most important appointment came in 1982 when he became an instructor for the Militia Command Staff Course at the Canadian Land Force Command and Staff College at CFB Kingston. He was an instructor for over 15 years and in 1994 was made Dean of the Course. While this recognition is mostly ceremonial, it was a tribute to the great contribution he made to Canadian military education. His trenchant analysis and animated classroom lectures placed him at the head of the faculty, of which he was later Director.

He has been twice decorated, with the Canadian Forces Decoration (CD) for long service and the Order of Military Merit (Canada) (OMM) on June 29, 2001.[1]

Obituary will be in the Gazette on Wednesday and Thursday.