Montreal, 28 March 2014 – members of the RMR Association (Branch 14) of The Royal Canadian Legion presented a cheque for $6,250 to Canada Company from its 2013 Poppy Fund at a Canada Company fundraising event held at Montreal Hockey Talk.  The RMR Association’s funds were donated to support the Military Employment Transition Program (MET) program, which is an initiative developed to assist Canadian Armed Forces (CAF) members who are transitioning out of the military, Reservists and Veterans who have been honourably released, obtain employment in the civilian workforce. This coordinated program serves as a bridge between the Canadian Armed Forces and Canada Company’s “CAF Friendly” employer partners.  Several RMR serving members have been assisted by Canada Company’s MET program since it launched in 2013. 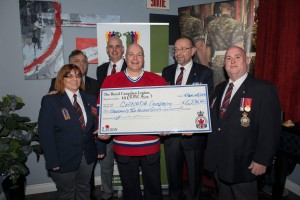