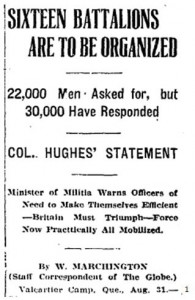 THIS DAY IN HISTORY – 01 September 1914 – Canada’s initial plans were to establish a Canadian Division consisting of three brigades, each with four battalions. It soon became apparent that with the greater numbers of men volunteering, there would be enough men to organize the Division instead on a four brigade, sixteen battalion structure.

The Globe, of Toronto, carrying the ongoing reports of their Staff Correspondent in Quebec, W. Marchington, reported on this day that “there were now 30,000 men in camp, or at the camp station, several hundred Edmonton men arriving too late in the day to detrain.”  [2]

He also wrote – “It was officially announced the night before that “the Queens Own Rifles and the 48th Highlanders of Toronto, and the 5th Royal Highlanders and 1st Royal Montreal Regiment of Montreal would go to the front as separate units.  This had been in doubt for some time, and the announcement caused great rejoicing among the men affected.  All the other battalions are to be reorganized, and orders have been issued for reorganization to commence at once. It is proposed to keep all Ontario men together.”  [3]

Marchington further reported that camp officials were determined to keep the camp “dry.” Two civilians who had attempted to smuggle liquor into the camp in their automobile were arrested and charged by the Provost Marshal before their contraband could be distributed. Activity in the camp was increasing in every department and night manoeuvres had commenced the previous night. [4]

Medical examinations of the men continued at a rapid pace, 2,000 men having been examined and passed by the Doctors the previous day, bringing the total examined to date to more than 10,000 men, of whom only about 900 failed to meet the standards required. [5]