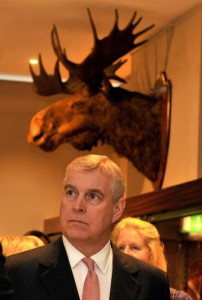 23 October 2015: There was an RMR connection quietly keeping an eye on things as Prince Andrew, the Duke of York, was invited to officially open the new-look York Army Museum of the RMR’s allied regiment in May 2015.

The former Territorial Army drill hall has been transformed thanks to a £1 million Heritage Lottery Grant and is home to important UK regimental collections, including those of the Royal Dragoon Guards, the former Prince of Wales’s Own Regiment of Yorkshire and The Yorkshire Regiment.

The Yorkshire Regiment is the RMR’s allied regiment, and the moose head was given as a present from the RMR when the ties were formalized in the 1920’s.