Westmount, Quebec – 29 March 2017: On the weekend of 17-19 February 2017 a platoon of The Royal Montreal Regiment (RMR) took part in “GPE 4”, a brigade wide exercise focusing on winter warfare tactics. On Friday February 17th approximately 30 members of the RMR received the newest version of battles orders, drew weapons from the vault, and deployed to the 62nd Field Artillery Regiment located in Shawinigan, Quebec. There they linked up with the troops of the Black Watch, the CGG and other regiments including trades such as combat engineers, armoured, and air force personnel. The mission, a combined effort to drive out a hostile enemy force occupying defensive positions on an airfield in the area, was successfully completed by Sunday. This was a particularly high profile exercise receiving a large degree of media coverage from CBC among other news sources as it was conducted in a suburban civilian neighborhood. The RMR was proud to be a part of this training value rich exercise and this rare opportunity to train alongside members of the RCAF, combat engineers and the regular force under the public eye. 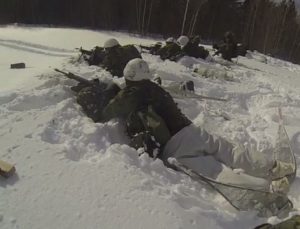 By 00:00 on Saturday the members of this exercise had all arrived at the 62nd RCA regiment’s armoury in Shawinigan, and went to ground. By 08:00 the following morning the participants had received updated orders again and were preparing to conduct their mission of offensive operations on the nearby enemy locations. Gear loaded up in trucks and light armored vehicles, the RMR was prepped for battle and left the RCA in Light Armoured Vehicles (LAV). Once the troops had been dropped off by the LAV’s they conducted reconnaissance patrols and went into the wood line with snowshoes and white camouflage, ready to conduct the raid. Slowed down by mine fields, the original plan was subjected to change slightly, offering a realistic training scenario where orders had to be changed quickly.

Through frontals and flankings the infantry managed to quickly close with and destroy the enemy force at the airfield. Soon afterwards a clearance patrol was conducted to drive out any final enemy forces. By 12:00 on Saturday the first phase was completed, a consolidation was carried out and quickly afterwards the defensives were occupied, a stealthy safe location for a bivouac was located, and the ten-man tents were set up. 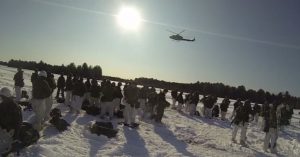 By 17:00 Saturday the troops left camp to carry out another raid on an enemy location in a nearby village. This exercise went a lot quicker due to a lack of minefields and was primarily an infantry exercise. The mission was executed with aggression and speed while experiencing few casualties. The mission was completed by 20:00 by which time the troops returned to the camp nearby the airfield and continued to occupy the newly acquired defensive positions of trenches and shell scrapes. The manning of these defenses were carried on throughout the night and into Sunday morning when the regular force arrived to conduct a relief in place for the reservists. By this time, 09:00 on Sunday, “End Ex” was called as the mission was successfully completed. An after-action review (AAR) was conducted, where troops displayed a higher than usual appreciation for this weekend exercise due to its amazing training value and rare opportunity to work alongside their comrades in the regular force, engineers, the armored and the RCAF.

By 17:00 on Sunday the troops of the RMR had returned to their home armoury, cleaned & returned their weapons, and conducted a last AAR where once again there was a high degree of satisfaction and appreciation for this particular exercise expressed.