The Battalion War Diarist wrote nothing for this day:  [1]

THIS DAY IN RMR HISTORY: Although the 14th Battalion was not engaged in any major operations at this time, life in the trenches was not without its hazards.  One of the greatest of these was the constant danger from enemy sniping.  Two soldiers of the 14th Battalion to lose their lives this week due to enemy sniping were Privates Otto Corner and Fred S.W. Jennings.

Privates Corner and Jennings along with five other members of the 14th Battalion are buried side by side in Section III, Row B, the row at the extreme left of this photo. 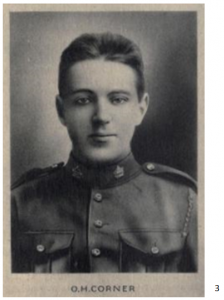 PRIVATE OTTO H. CORNER, No. 22979: “Private Corner was born in Inverness, Scotland, in 1892. He received his education in the schools of his native place, and after serving his apprenticeship in the Inverness branch of the British Linen Bank, he came to Canada in August 1913, and joined the staff of the Bank of British North America.  He enlisted in August 1914, as a Private with the 12th Battalion and went overseas with the First Canadian Contingent and arrived in France with his unit in February 1915.  He was with the 14th Battalion in all the intense fighting in the Ypres salient during the spring of 1915.  On July 7th, 1915 he was instantly killed in the front line at Ploegsteert (Plug Street) in Belgium, by an enemy bullet which came directly through the loop-hole in the barricade from which he was firing.  He was one of nine brothers, seven of whom, were on active service in the war.”  [4] 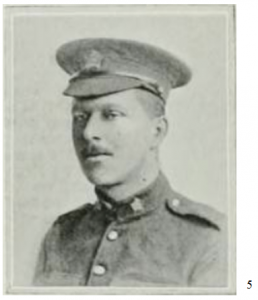 PRIVATE FREDERICK SINCLAIR WILLS JENNINGS, No. 63495: Frederick S.W. Jennings was the eldest son of Frederick Wills Jennings, of 8, Selborne Place, Hove, formerly of Ealing and Streatham, B.A., retired H.C.S.  He was born at Wandsworth Common, Co. Surrey, 11 Nov. 1881. He received his education at St. Paul’s School (foundation scholar); Wren’s; Edinburgh University and Bangor University (Agricultural Department).  Jennings was in the 1st XV at St. Paul’s, and joined the Cadet Corps during the South African War.  After finishing his course at Bangor University, he went to Canada and took up land in British Columbia, but on the outbreak of war volunteered for active service overseas with the West Mounted Rifles, at Calgary, and when he arrived at Quebec he was posted to the 23rd Battalion on 4 Nov. 1914. After training in Quebec, he went over with the Reserve Battn. of the 1st Contingent to Shorncliffe in March 1915, and went to the Front in May.  He was shot through the head by a sniper while on duty in the trenches, near the Bois de Ploegsteert, Belgium on 6 July, 1915 and was buried the same day in a small cemetery in Ploegsteert Wood.  He was unmarried.   His Platoon Commander wrote:  “He joined my platoon from the 23rd Regt. early in May, after the Battle of Ypres, and I was struck from the first by his cheerfulness, quiet obedience, and a striking devotion to duty in face of the many obstacles we have to contend with.  He received his baptism of fire shortly after coming to this country at the Battle of Festubert, and was with us at Givenchy, coming successfully through these ordeals.”