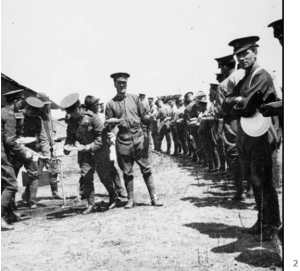 “Scanty water supply of the main camps was piped up to open reservoirs from pumping stations at wells or streamlets; as a rule there were but two taps in the lines of each battalion for all purposes. For each unit a marquee was provided for bathing and some used bell tents also, but the ration of fuel – 2 pounds wood and 1 pound coal per man until 21st November, with an added pound of wood thereafter – and the lack of boilers allowed little hot water.

The equipment per battalion for the first two months was only six tubs, one forty gallon cistern, and a stove. The Southern Command fitted up the Old Corn Store in Salisbury – ten to fifteen miles from the camps – so that a man might have a hot bath for four pence, if he could find his way there between 5 and 8 p.m. on week days or on Sunday afternoon. Village washerwomen plied a lively trade, and enterprising laundry firms in Salisbury and even London made arrangements for collecting washing weekly by motor truck.

Washing and bathing in rivers, streams or mist ponds and the watering of horses in the last, were strictly forbidden; reservoirs and pumping stations were out of bounds and under armed guard. Horse troughs connected to the camp water system were placed to serve a number of neighbouring units.”  [3]