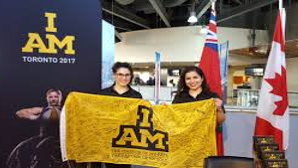 Invictus Flag signed with words of encouragement by those in attendance to present to each competitor at Games (Source: Invictus Games)

Westmount, Quebec – 30 August 2017:  In the months leading up to the Invictus Games Toronto 2017, the Official Invictus Games Flag will travel with 150 Flagbearers from coast to coast to bring the spirit of the Games and the power of sport to all Canadians. The 37-day cross-Canada journey will visit 22 military bases, 15 Legions and over 50 communities who have been a part of Canada’s rich 150-year history. The RMR Association (Branch 14) of the Legion is the only stop on the island of Montreal, and the entire RMR Family is encouraged to welcome the Invictus Games Flag Tour in the RMR’s armoury on Wednesday 13 September 2017, starting at 18h30.

The ceremony to be held at the RMR on Wednesday 13 September 2017 will involve a guard of honour provided by the Regiment, a contingent of veterans from the RMR Association, as well as a flag party from each group. The flags will be signed by participants and videos of well wishes for the athletes will be recorded during a small reception. Come and make your voice heard – show your support to these wounded warrior athletes!

The Invictus Games are far more than a seven-day sporting event; it’s a means of rehabilitative therapy for the participating wounded, ill and injured active duty and veteran service members from 17 nations. The Games use the power of sport to inspire recovery, support rehabilitation and generate a wider understanding and respect for all who serve their country as well as their families and caregivers.

With all sport tickets priced at just $25, and Opening Ceremony tickets starting at $60, the Games will be accessible to those wishing to witness the incredible human spirit of our wounded warriors.  Tickets can be purchased online at invictusgames2017.com/tickets.